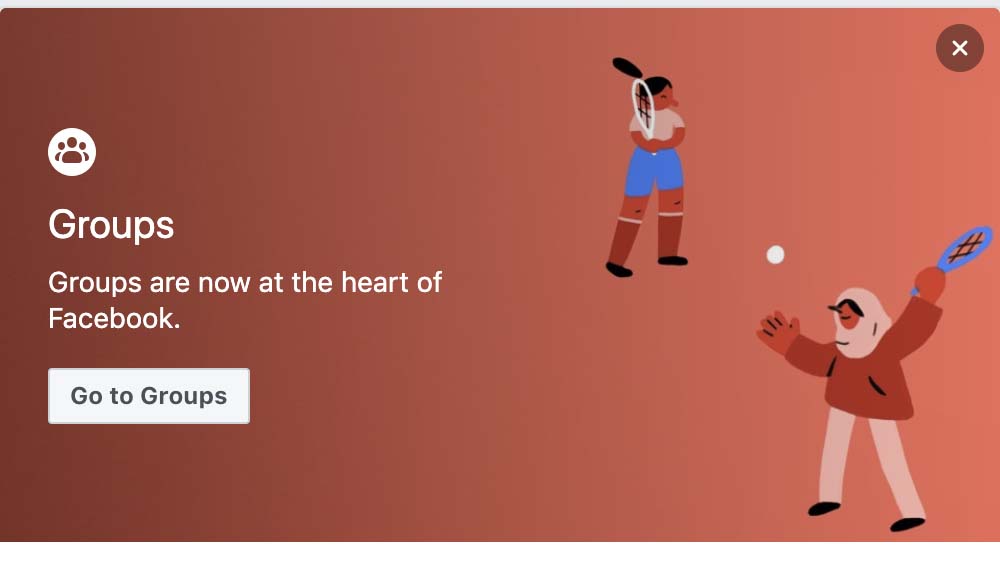 05 Jun Why a Facebook group, not page, is the way to go

The first rule of flight club is you don’t talk about fight club. The only thing is, everyone does. That also holds true to a private group on Facebook.

Whether it’s the inside jokes, information you can’t get anywhere, or the opportunity to mix it up with like minded individuals, people crave exclusivity.  It’s also what Facebook wants you to do.

At their annual F8 conference, Zucks stated that “groups are at the heart of the Facebook experience.” Facebook followed that up by pinning that nifty little graphic at the top of everyone’s facebook (Yes, we used it for this email.) as well as this video.

While groups aren’t new, only a few brands are really leveraging them as a marketing channel. Back in 2016 The Hustle hosted a Live, ask-me-anything chat with entrepreneur/author Tim Ferriss. The catch was that it was only available to Hustle Ambassadors. Of course to be a Hustle Ambassador, you had to refer several people to be signed up to their newsletter. This spurred thousands of new signups of people that wanted the opportunity to ask a question. They’ve duplicated this a few times since then and, well, they just passed the 1 million active subscriber mark.

Peloton is another  brand that has experienced a ton of success with their Facebook Group. Their VP of community, Jayvee Nava, has said that its group grew from 1,300 to more than 116,000 between 2015 and 2018. “Membership growth in the Group has far outpaced Bike sales, as existing Members invite their family, friends and colleagues to join this positive and supportive community,” said Nava

It definitely isn’t something that can grow overnight, but like anything, with the right content, offer, and feeling of exclusivity you can DEFINITELY turn a private group into a marketing machine.

By the way, be on the lookout for an invitation to a Facebook live chat from us in the near future ;-).